The new Jadis studio album is nearing completion and is expected to be released sometime in September. No Fear of Looking Down’ will be independently released through our Jadismusic label and will have 8 tracks and available on CD Digipak, Digital Download and Vinyl.

The title, ‘No Fear of Looking Down’ and the idea, came about after watching on YouTube the perilous ascents…and descents of city and urban structures by fearless young ‘explorers’. They have now added to their dramatic antics by filming the climbs using high definition GoPro cameras. Being somewhat anxious myself when it comes to sheer heights, these unnerving accounts struck a chord with me and therefore thought it would be an interesting subject. Think climbing one of the Battersea Power Station chimneys at night, while it’s windy and with no harness, or free climbing Centrepoint in London and then performing handstands on one of the cranes…

The album has been recorded over the last three years and once again has Steve Christey on Drums and Andy Marlow playing Bass. We have also been fortunate this time to get some excellent musical contributions from former Jadis keyboard player Martin Orford, who will be playing some keyboard solos, piano, backing vocals, flute and some hurdy gurdy. This album will have plenty of variation, as well as the characteristic guitar melodies and riffs.

I have once again been engineering and producing the album in my modest studio, although the drums have been recorded in various locations over the past few years using different kits as Steve has plenty to choose from. This is the first time we have recorded like this as usually the drums get recorded over a period of 2 days with the same kit. As usual Steve’s playing is brilliant and coupled with Andy’s excellent bass playing, the rhythm section is stunning. I really enjoy putting the bass and drums together as that is the foundation for all the other instruments and vocals that go on top.

I have added a few photos from the studio during the recording when it was a total mess most of the time and when it was tidy for the mixing. The video of our recording session of ‘Where Am I’ was recorded at Steve’s new drum studio in Hampshire."

Drum recording session for the song 'Where Am I' - July 2016 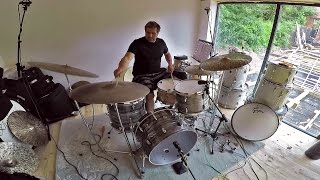 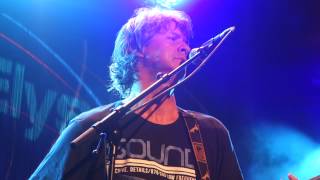